Computing filter banks and MFCCs involve somewhat the same procedure, where in both cases filter banks are computed and with a few more extra steps MFCCs can be obtained. In a nutshell, a signal goes through a pre-emphasis filter; then gets sliced into (overlapping) frames and a window function is applied to each frame; afterwards, we do a Fourier transform on each frame (or more specifically a Short-Time Fourier Transform) and calculate the power spectrum; and subsequently compute the filter banks. To obtain MFCCs, a Discrete Cosine Transform (DCT) is applied to the filter banks retaining a number of the resulting coefficients while the rest are discarded. A final step in both cases, is mean normalization.

For this post, I used a 16-bit PCM wav file from here, called “OSR_us_000_0010_8k.wav”, which has a sampling frequency of 8000 Hz. The wav file is a clean speech signal comprising a single voice uttering some sentences with some pauses in-between. For simplicity, I used the first 3.5 seconds of the signal which corresponds roughly to the first sentence in the wav file.

I’ll be using Python 2.7.x, NumPy and SciPy. Some of the code used in this post is based on code available in this repository.

The raw signal has the following form in the time domain:

Signal in the Time Domain

The pre-emphasis filter can be applied to a signal \(x\) using the first order filter in the following equation:

which can be easily implemented using the following line, where typical values for the filter coefficient (\(\alpha\)) are 0.95 or 0.97, pre_emphasis = 0.97:

Pre-emphasis has a modest effect in modern systems, mainly because most of the motivations for the pre-emphasis filter can be achieved using mean normalization (discussed later in this post) except for avoiding the Fourier transform numerical issues which should not be a problem in modern FFT implementations.

The signal after pre-emphasis has the following form in the time domain:

Signal in the Time Domain after Pre-Emphasis

After pre-emphasis, we need to split the signal into short-time frames. The rationale behind this step is that frequencies in a signal change over time, so in most cases it doesn’t make sense to do the Fourier transform across the entire signal in that we would lose the frequency contours of the signal over time. To avoid that, we can safely assume that frequencies in a signal are stationary over a very short period of time. Therefore, by doing a Fourier transform over this short-time frame, we can obtain a good approximation of the frequency contours of the signal by concatenating adjacent frames. 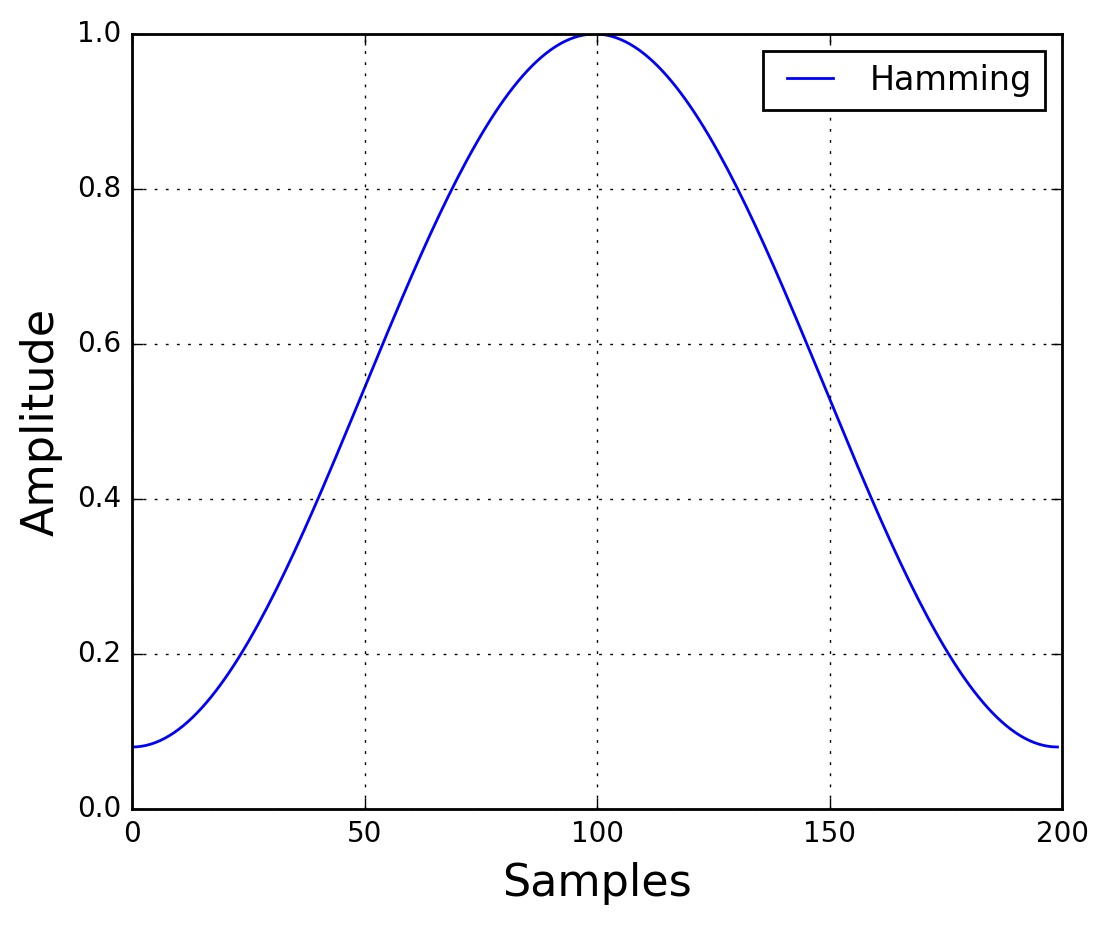 There are several reasons why we need to apply a window function to the frames, notably to counteract the assumption made by the FFT that the data is infinite and to reduce spectral leakage.

We can now do an \(N\)-point FFT on each frame to calculate the frequency spectrum, which is also called Short-Time Fourier-Transform (STFT), where \(N\) is typically 256 or 512, NFFT = 512; and then compute the power spectrum (periodogram) using the following equation:

The final step to computing filter banks is applying triangular filters, typically 40 filters, nfilt = 40 on a Mel-scale to the power spectrum to extract frequency bands. The Mel-scale aims to mimic the non-linear human ear perception of sound, by being more discriminative at lower frequencies and less discriminative at higher frequencies. We can convert between Hertz (\(f\)) and Mel (\(m\)) using the following equations:

Filter bank on a Mel-Scale

This can be modeled by the following equation (taken from here):

After applying the filter bank to the power spectrum (periodogram) of the signal, we obtain the following spectrogram:

Spectrogram of the Signal

If the Mel-scaled filter banks were the desired features then we can skip to mean normalization.

One may apply sinusoidal liftering1 to the MFCCs to de-emphasize higher MFCCs which has been claimed to improve speech recognition in noisy signals.

As previously mentioned, to balance the spectrum and improve the Signal-to-Noise (SNR), we can simply subtract the mean of each coefficient from all frames.

and similarly for MFCCs:

To this point, the steps to compute filter banks and MFCCs were discussed in terms of their motivations and implementations. It is interesting to note that all steps needed to compute filter banks were motivated by the nature of the speech signal and the human perception of such signals. On the contrary, the extra steps needed to compute MFCCs were motivated by the limitation of some machine learning algorithms. The Discrete Cosine Transform (DCT) was needed to decorrelate filter bank coefficients, a process also referred to as whitening. In particular, MFCCs were very popular when Gaussian Mixture Models - Hidden Markov Models (GMMs-HMMs) were very popular and together, MFCCs and GMMs-HMMs co-evolved to be the standard way of doing Automatic Speech Recognition (ASR)2. With the advent of Deep Learning in speech systems, one might question if MFCCs are still the right choice given that deep neural networks are less susceptible to highly correlated input and therefore the Discrete Cosine Transform (DCT) is no longer a necessary step. It is beneficial to note that Discrete Cosine Transform (DCT) is a linear transformation, and therefore undesirable as it discards some information in speech signals which are highly non-linear.

It is sensible to question if the Fourier Transform is a necessary operation. Given that the Fourier Transform itself is also a linear operation, it might be beneficial to ignore it and attempt to learn directly from the signal in the time domain. Indeed, some recent work has already attempted this and positive results were reported. However, the Fourier transform operation is a difficult operation to learn and may arguably increase the amount of data and model complexity needed to achieve the same performance. Moreover, in doing Short-Time Fourier Transform (STFT), we’ve assumed the signal to be stationary within this short time and therefore the linearity of the Fourier transform would not pose a critical problem.

In this post, we’ve explored the procedure to compute Mel-scaled filter banks and Mel-Frequency Cepstrum Coefficients (MFCCs). The motivations and implementation of each step in the procedure were discussed. We’ve also argued the reasons behind the increasing popularity of filter banks compared to MFCCs.